Guillermo in The Bourne Ultimatum


This is one of the funniest things I've ever seen.
Posted by Mark Cowart at 8:14 AM 22 comments: I was taking a picture of Cora today. I was trying to get her to smile when she said, "Daddy, can I just look bored and then you take my picture?" So, here is Cora...looking bored.
Posted by Mark Cowart at 9:35 AM 33 comments: FRANKLIN — The Hollywood Video on Murfreesboro Road, which normally rents out the latest releases, was creating some after-hours movie magic of its own last week.
Among the shelves of DVDs showcasing big-budget pictures, cameras, microphones and lighting equipment bustled around the actors involved in the shooting of an independent short from local film production company Seabourne Pictures.
"Seabourne is based in Franklin, so we really scour around everywhere to find places that would be good to shoot a movie. And this area has some fantastic locations," said Mark Cowart, who is directing Love at First Sight in the local video rental store.
On Tuesday night, the movie shoot was set in the parking lot outside Hollywood Video. But on Wednesday, the crew had moved inside the cooler, less buggy comfort of the store.
Billed as a comedy with a romantic side, Love at First Sight's story centers on the DVD release date of the biggest epic drama of the year — a fictional movie also known as Love at First Sight. Video store clerk Dane, a cynical 19-year-old who hates the Hollywood-style blockbuster type of film, thinks a 1962 French film, Labor of Love, is a better production.
His co-worker, Jessica, makes a wager with Dane that every copy of Love at First Sight will be rented before a single copy of Labor of Love goes out the door. After accepting the bet, Dane then launches a campaign pushing the subtitled film on every customer who wanders into the store.
Seabourne Pictures, a collaboration between Cowart, Christian musician Michael W. Smith and Smith's son, Ryan, is also shooting another short film — this one with sci-fi elements — in the area along with work on Love at First Sight.
Relapse, directed by Ryan Smith, takes place in a not-too-distant future when technology has advanced to the point that human cloning is a reality. But the process isn't perfect — clones can only survive for one day, and one particular person can be cloned only seven times.
In the film, a mother whose son has died is cloning her boy for the final time. The story follows the last day they spend with each other as she comes to grips with losing him forever.
Filming locations included a Franklin cemetery, The Aquarium restaurant in Opry Mills and a building across from Cummins Station in Nashville, as well as inside the Smith home.
But chances are these films won't be seen at the multiplex. Love at First Sight, with an estimated run time of 15 minutes, and Relapse are more likely to end up at film festivals or on a demo reel — a short video used to showcase a film production company's work to others in the movie production field.
"We started Seabourne about 3½ years ago, so now we're trying to make our way into feature film production. When I met Ryan about four years ago we both really wanted to get involved with movies, so we decided to go into this together," Cowart said.
Contact Bonnie Burch at 771-5421 or bburch@tennessean.com.
Posted by Mark Cowart at 9:14 AM 42 comments: The other day, Mary was talking to Rae about how she was going to be good. She said, "Mommy, I'm not gonna fuss. And I'm not gonna cry like a little boy!"
Posted by Mark Cowart at 8:34 AM 37 comments: (click on the image for more RELAPSE and LAFS pics)

Well, we finally shot Love At First Sight. What an exhausting process! We wrapped production on both Relapse (Ryan's short film) and LAFS about two weeks ago. Relapse was shot in three days (two days and one all nighter to be exact). LAFS was shot over four nights, from 10pm to 10am. We had a lot of fun, although I think all of us on LAFS cast and crew were happy to say good-bye to the 12-hour nights. There is something really discouraging about seeing the sun come up after working for through the night and realizing that daylight only means another four hours of work.

Sorry for the delay in updates. I've been locked in my living room for the last two weeks and not been allowed any food, drink or real sleep until I complete the edit. And since my days and nights aren't back to normal yet, I walk around in a perpetual state of disorientation, never really knowing what time or day it is. Ok, so I'm exaggerating. But only a little.

Good news is that the footage looks great, and the edit is coming together. Thanks again to my cast and crew for doing a great job, and for being willing to eat your lunch at 4 am.
Posted by Mark Cowart at 3:30 AM 36 comments: 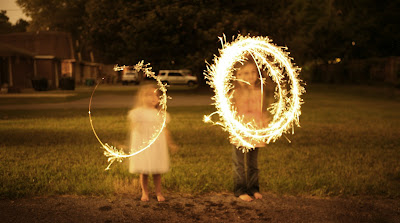 Fun in the backyard with sparklers. This was taken just after dark.
Posted by Mark Cowart at 7:51 PM 44 comments:

We shot our first day of a short film I'm directing called "Love At First Sight". Its about a cynical 19-year-old video store clerk who doesn't believe in love at sight, but ends up falling in love at first sight with a girl who rents his favorite movie. We are shooting three "movies" within the movie. These three movies will appear on screens in the video store at different times. The one we shot today is a called "ZOM-LEAH". Think "Predator" meets "Rambo" meets "The Evil Dead".
Our shoot was going great until a monsoon shut us down for about an hour and flash-flooded the dried creek bed we were shooting in. After the lighting, hail, and torrential rain stopped, we reworked the story a little to accomodate the waist-deep creek that now ran through our set and shot everything else we needed (hopefully)! Despite the rain, I think we all had a little too much fun shooting a spoof of the action films we grew up on in the 80's.
A friend of mine, Seth Worley, is one of our second unit directors. He did an incredible job directing Zom-Leah today. Thanks, Seth. And thank you Tyler Torti for a fantastically cheesy script!
Posted by Mark Cowart at 12:35 AM 7 comments:

This is a video of Mary telling a Knock-Knock joke that she learned before she could even pronounce most of the words in it. She repeated it non-stop for a couple of weeks, and then quit shortly after I put this video together. She won't tell the joke anymore. She says, "No...I'm not playing that right now."
Posted by Mark Cowart at 12:48 PM 3 comments: 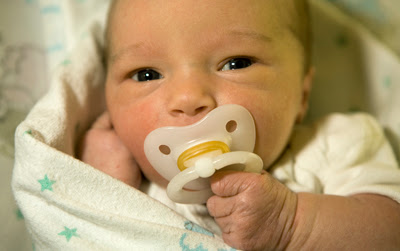 Well, she's here and she's beautiful! Evelyn Claire Cowart was born at 7:13 AM on July 12, 2007 . She weighed 6lb 6oz, and was 19 1/2 inches long. She has dark hair, thin eyebrows (for a Cowart anyway), long fingers and toes, tiny ears, and what appears to be an early receding hair line. Her hands and feet are all wrinkly, and she has Mary's mouth when she cries. She's already resumed normal newborn activities - sleeping, eating and pooping.
It's been a long week with lots of emotion and excitement. Rae went into labor with 6-minute contractions around 9 PM on Wednesday, July 11. It was a long, sleepless night spent with family, episodes of Frasier, and contractions every five minutes. Labor progressed slowly until 7AM the next morning when the nurses paged the on-call doctor, who was already on her way to the hospital. It was too late, though. By 7:12 AM, Evelyn peeped her head out, just before the nearest doctor walked in the door. Dr. Norman, who we'd never met, slipped her gloves on quickly, released the cord around Evelyn's neck, helped her arrive safely at 7:13 AM, gave a sigh of relief and said, "Hi! I'm Dr. Norman."